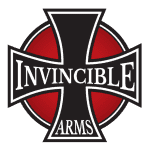 OCTOBER 21, 2015 – Willoughby, OH – (ArmsVault.com) – Invincible Arms, LLC announced that it has awarded an Invincible Arms Tactical Rifle to Officer Jeff Nelson of the Bettendorf (IA) Police Department. The rifle was donated in support of the National Tactical Officers Association (NTOA). Officer Nelson was selected by the NTOA as the recipient of the rifle at their 2015 Tactical Conference held last month in Salt Lake City, UT.

“NTOA is excited about Invincible Arms’ support of the NTOA Conference and the rifle awarded to Officer Nelson,” commented Corey Luby, Director of Sales & Marketing for the NTOA. “We look forward to more participation and programs with Invincible Arms in the future.”

“We are honored to support the NTOA and their members in any way that we can,” stated Israel M. (Izzy) Anzaldua, President of Invincible Arms. “As a former peace officer myself, it brings me a great sense of joy knowing we are able to give back and stand by this important organization.”

Invincible Arms, LLC, founded in 2013, manufactures AR-platform rifles, firearm parts and accessories. Leveraging our team’s 25+ years of manufacturing experience on the AR platform, Invincible Arms seeks to deliver the most relevant product to market in order to meet the needs and requirements of gun owners nationwide. Black Forge Weapons®, a subsidiary of Invincible Arms, operates as the parts & components arm of the company.