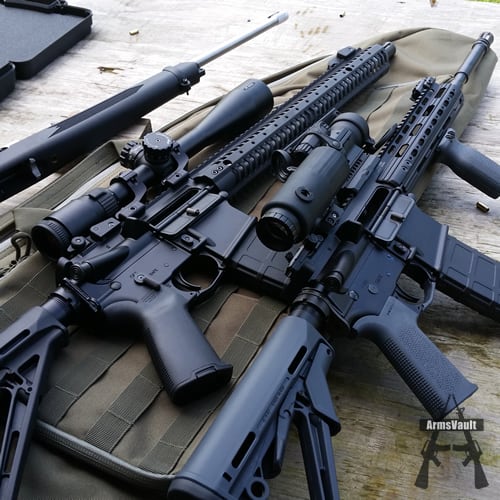 There is no doubt that Americans love the AR-15 rifle. But at the same time, there are some that have an intense fear of this “scary looking” black rifle. Why? Well, don’t get me started! I’ll just summarize by saying that the anti-gun crowd and media needed a poster-child for their anti-gun agenda. The sinister-looking black components of the AR-15 apparently make this rifle an easy target when it comes to spreading irrational fear. I know, I know… I’m dangerously close to turning this into a rant. Don’t worry, I’ll get to the point.

Introducing new shooters to the AR-15 is always a lot of fun, especially when those shooters start off with a slight fear of the rifle. I’ve found that with a little training, and a few rounds sent down range, the new shooter quickly turns into a fan of the rifle.

Over the last year, I’ve been able to watch my wife’s confidence level with the AR-15 dramatically increase. Her first few range trips with an AR consisted of her firing a few rounds, then giving up for some pistol shooting. Now, however, it is nothing to hear her bust out a quick 10-15 round burst, followed by giggling.

Now that my wife is well on her way to becoming an AR-15 junkie, I figured it was time to introduce my mom to the AR platform.

I grew up in a household where guns were commonplace. And my mom certainly spent some time at the range with us. But, if memory serves, I don’t believe I ever saw her shoot anything other than her single-shot 22 rifle, some revolvers, and maybe a shotgun or two.

So, today was the big day… I loaded up the family (mom included), grabbed a couple AR-15 rifles, and headed to the range.

The two AR-15 rifles, from Kavod Custom, are set up differently. One is equipped with an Aimpoint PRO red dot and Samson 3.5x Magnifier. I assumed that this rifle would be the best match for the type of short-range shooting that my mom would probably want to do. But, in the event that she was interested in longer-range shooting, the other AR-15 is equipped with a Nikon P-223 riflescope. Although she shot both rifles, it turns out that she preferred the longer range shooting (100 yards). So, the KVD-15 with Nikon P-223 was her rifle of choice.

In about an hour, my mom went through approximately 100 rounds of 5.56 ammo. I didn’t save any of her targets, but I think she did really well for her first time with the AR-15. At 100 yards, her groups were probably about paper-plate size. Well done, Mom!