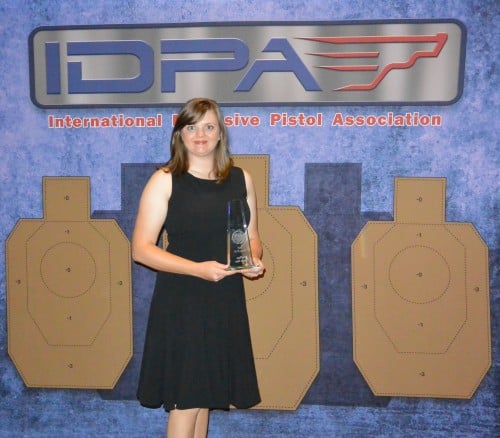 Rogers finished 2nd overall in the SSP division, 7th overall in a field of 430 top competitors, and 2nd Lady with a final time of 229.79.

“The IDPA World Championships was an amazing opportunity to bring all of the top shooters together in one place. I am ecstatic to have finished first master among so many talented shooters, in a very challenging match. Huge thanks to all the staff and volunteers who helped to make this event happen,” said Rogers, Team Comp-Tac member and Sales and Marketing Manager for Comp-Tac.

In addition to being represented at the IDPA World Championships by its shooting team, Comp-Tac Victory Gear also supported the match as a gold level sponsor. Voted the most popular brand of holster used at the IDPA Nationals the past three years (2012-2014), Comp-Tac continued their support of the match by offering both competition and concealed carry gear to all competitors during the event. This is the eighth year that Comp-Tac has been a major sponsor at the IDPA National/World Championships.

“IDPA matches are one of the key development, testing and feedback arenas for Comp-Tac. All the competitors share their valuable knowledge with us, and we use that to develop products for not only competitive shooting but every day carry. Supporting events like the World Championship are a way for us to give back to those customers who share so much with us,” explained Gregg Garrett owner and president of Comp-Tac Victory Gear.

Randi Rogers has been shooting for the past 17 years. Starting with her grandparents in the sport of Cowboy Action Shooting and SASS, Rogers has grown into one of the best competitive shooters earning over 40 World and National Championship titles in 8 different shooting disciplines. Rogers is a member of Team Smith and Wesson and Team Comp-Tac and competes in action shooting sports including but not limited to; USPSA, IPSC, IDPA, Steel Challenge, NRA Action Pistol Bianchi Cup and 3Gun. When she is not on the range Rogers is the full time Sales and Marketing manager for Comp-Tac Victory Gear.

Next up for Team Comp-Tac, Rogers will compete in the USPSA Limited Handgun National Championships, October 4-6, in Frostproof, Florida.