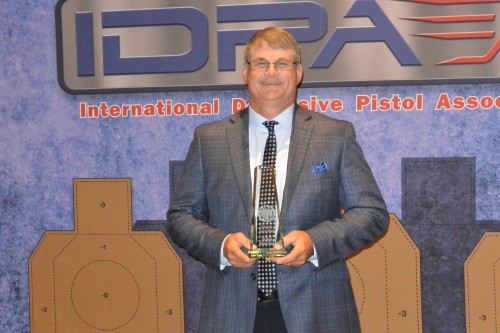 Carrell finished 2nd overall in the ESP division and 4th overall in a field of 430 top competitors and with a final time of 214.93.

“I’m extremely pleased with my 1st ESP Master Title and 4th overall finish in such a talented field of competitors. The stages were a true test of competitive shooter’s marksmanship and shooting skills. A huge thank you to all of the match staff for putting together such a well ran event,” said Carrell Team Comp-Tac member and General Manager of Comp-Tac Victory Gear.

In addition to being represented at the IDPA World Championships by its shooting team, Comp-Tac Victory Gear also supported the match as a gold level sponsor. Voted the most popular brand of holster used at the IDPA Nationals the past three years (2012-2014), Comp-Tac continued their support of the match by offering both competition and concealed carry gear to all competitors during the event. This is the eighth year that Comp-Tac has been a major sponsor at the IDPA World/ National Championships.

“One of the key policies at Comp-Tac is that all of our employees use, test and refine our products. Team Comp-Tac members use Comp-Tac products in events like the IDPA World Championship and it gives the whole company a chance to learn what is working and what needs improvement. Being able to meet countless fellow shooters and hear their stories and suggestions is an extremely rewarding experience,” explained Gregg Garrett owner and president of Comp-Tac Victory Gear.

Gordon Carrell has been shooting for more than 15 years. Beginning with general marksmanship and expanding into competitive shooting Carrell has amassed over 50 National, State, Regional and local titles. Carrell is the General Manager of Comp-Tac Victory Gear, a member of Team Comp-Tac, and the lead instructor for GLC Shooting Academy. Carrell is highly involved in the shooting and outdoor industry and is supported by Apex Tactical Specialties, Armadillo Concealment, Smith and Wesson and Warren Tactical Sights.

Next up for Team Comp-Tac, Rogers will compete in the USPSA Limited Handgun National Championships, October 4-6, in Frostproof, Florida. Rogers and Carrell will then compete in the IDPA BUG Gun Nationals November 6-8, in Springfield, Mass.