PolyCase Ammunition and Alexander Arms Team Up on .50 Beowulf ARX®

SAVANNAH, Ga. — (ArmsVault.com) – PolyCase Ammunition, LLC, and Alexander Arms announced this week that they have teamed up to offer PolyCase’s ARX® projectile in a .50 Beowulf variant.  The .50 Beowulf, developed and produced by Alexander Arms, for the AR-15 platform, is designed to deliver exceptional stopping power at short to moderate range.  PolyCase’s ARX® projectile is an advanced, injection-molded copper polymer bullet which transfers maximum energy to targets without expanding like a hollow-point.

“We are thrilled to be working with Alexander Arms to offer the ARX® projectile in the .50 Beowulf caliber,” says Paul Lemke, founder and CEO of PolyCase Ammunition.  “This caliber is the ultimate big-bore semi-auto rifle cartridge.  When you combine the massive energy of the .50 Beowulf with the patent-pending stopping power of the ARX®, you have a defensive and hunting rifle cartridge that is second to none.”

Alexander Arms released the .50 Beowulf in 2003 and it now dominates the big-bore AR-15 market. Since its inception, the .50 Beowulf continues to gain adherents in the civilian market as a self-defense and big-game hunting cartridge. In addition it is recognized in law-enforcement as an effective barrier breaching and vehicle interdiction round. The introduction of the PolyCase’s ARX® projectile, represents another milestone in the development of the .50 Beowulf cartridge. 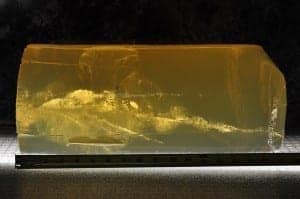 Says Bill Alexander, founder of Alexander Arms, “This projectile [the ARX®] is going to push the limits of what the .50 Beowulf can do.  In our testing we found that the ARX® transfers a maximum amount of energy with minimal over-penetration, resulting in one of the most effective defensive and short- to medium-range hunting cartridges on the market”.

.50 Beowulf ARX® ammunition is available directly from Alexander Arms at www.alexanderarms.com and from select retailers nationwide as well as Midway USA.

PolyCase Ammunition develops, manufactures, markets, and sells world-class, patent pending, small arms ammunition and projectiles used by discerning professionals and sports shooters. Made in the USA, using over ninety years of advanced design, materials and manufacturing experience; our twenty-first century products are designed to provide the lethality and consistency expected by our customers.

The PolyCase Ammunition team consists of experts in chemical, mechanical, advanced materials and industrial engineering, ammunition research, development, testing, and evaluation, precision manufacturing, marketing, and U.S. domestic and international sales. We have proudly partnered with other industry leaders to provide our deserving customers with ammunition manufactured using only the most efficient components. PolyCase Ammunition was founded in 2012 and is headquartered in Savannah, Georgia.

Alexander Arms® is an American manufacturer of firearms, ammunition and firearm components.  The Company designed and developed both the .50 Beowulf and 6.5 Grendel cartridges and currently manufactures a range of ammunition in both calibers.  It also currently manufactures AR-15 based rifles in .50 Beowulf, 6.5 Grendel .17 HMR, 5.56 NATO, 300 AAC. In addition it designed, developed and now markets a .338 Lapua semi-automatic rifle, the Ulfberht.  Alexander Arms® was founded in 2001 in Radford, Virginia, and maintains its primary manufacturing facilities at the U.S. Army Radford Arsenal in southwest Virginia.