BESSEMER, Ala. (June 5, 2015) — (ArmsVault.com) – With more than 2,000 rounds through his out-of-the-box Steyr HS.50, Sgt. Maj. Walter Wilkinson (USA Ret.) was preparing to replace the barrel on his rifle, but he decided to shoot one final match with it, the Fifty Caliber Shooters Association Spring Regional Match at the NRA Whittington Center in Raton, NM, May 23 and 24. The old barrel worked well for him yet again, as he took first place in the Hunter Class (shot from the prone position off a bipod at 1,000 yds.) for both Score and Group, and he picked up second place in Light Gun.

The 58-year-old native of Edgewood, NM, and two-time World Champion bested 14 other Hunter Class shooters with his score of 286-10X, and his 13.063 inch aggregate in very challenging wind conditions gave him the win for Hunter Class Group. His final score also secured second place in Light Gun, a class where shooters primarily shoot from concrete benches using benchrests.

“Match-level guns normally need to be replaced about every 1,500 to 1,700 rounds,” Wilkinson said. “After five years and no less than 2,000 rounds of shooting, I figured it was about time. It was starting to show signs of inaccuracy last year, but it seems okay right now.”

“Okay” might be an understatement. Wilkinson shot his first screamer group (smaller than 7 inches) of the year that measured 5.688 inches and scored a perfect 50 with three tie-breaking X-ring shots.

“The group was nice, but what I felt best about was the wind changed direction—as it was doing all day—after the fourth round,” Wilkinson said. “It had been right-to-left, and then it switched to left-to-right. I was able to figure it out and put the last one in there for the 50.”

Wilkinson proved once again that the Steyr HS.50 is the world’s most accurate factory production .50 BMG bolt-action.

“Walter is an absolutely amazing long-range shooter, and we’re extremely excited to see him jump out of the gate with his first wins of the 2015 shooting season,” said Scott O’Brien, CEO of Steyr Arms. “We offer him our heartiest congratulations for battling through the conditions and taking the wins.”

Established in 1864 in Steyr, Austria, Steyr Arms is one of the world’s oldest and most prestigious firearms manufacturers. Steyr’s comprehensive lines of premium hunting rifles and precision sporting and tactical firearms are technically mature, and their subtle elegance also communicates the harmony between appearance and substance. Steyr’s legendary SBS actions and cold-hammer-forged barrels are distinctive and unparalleled. For more information, contact Steyr Arms at 2530 Morgan Rd., Bessemer, AL 35022; call (205) 417-8644; or visit www.steyrarms.com. 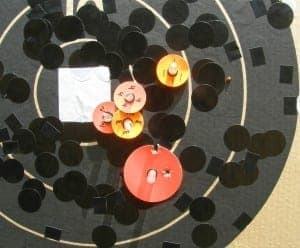