“We are very lucky to have the Navy SEAL Museum and Memorial in our backyard here in Vero Beach, FL. When I found out that our National Navy SEAL Museum and SEAL Memorial receive absolutely zero funding from the U.S. Government, I thought to myself we have to help these guys. We just thought our company should try and give back a little to help remind everyone of those who risk their lives to defend our freedom. Thanks to the support of Quail Valley River Club, our friends in the firearms industry, and very generous attendees, we feel like we had a successful first annual event.” said Gorilla Ammunition’s CEO Lanse Padgett.

The ground upon which the National Navy UDT-SEAL Museum rests in Fort Pierce, Florida is recognized as the birthplace of the U. S. Navy Frogmen. From 1943 to 1946, thousands of brave volunteers were trained as members of Naval Combat Demolition Units and Underwater Demolition Teams. The World War II Frogmen have evolved into the most elite fighting force in the world, the U. S. Navy SEALs. The Mission of the Museum is to preserve the legacy and history of these “Teams”.

The National Navy UDT-SEAL Museum was formally dedicated in November of 1985. Since that time a continuous stream of history and artifacts has returned home to Ft. Pierce. The exterior exhibits include Apollo training crafts, a Vietnam-era ”Huey” helicopter, and unique water craft and support boats. Some of the last remaining beach obstacles used for training during World War II have been recovered from the ocean depths and now rest on the museum grounds.

“We appreciate Lanse, Gorilla Ammunition, and Quail Valley Charities for hosting this great event. We are so pleased with the turn out and results of the event and cannot wait to put the funds to use in improving our facilities and continue to pay tribute to our nation’s most elite warfighters” said Rick Kaiser, Executive Director of the National Navy SEAL Museum 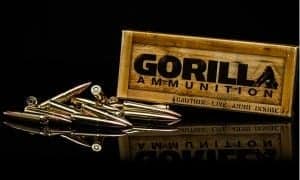