Earlier this year, we launched the innovative R51 subcompact pistol to critical acclaim.   During testing, numerous experts found the pistol to function flawlessly. In fact, they found it to have lower felt recoil, lower muzzle rise and better accuracy and concealability than other products in its class.

However, after initial commercial sales, our loyal customers notified us that some R51 pistols had performance issues. We immediately ceased production to re-test the product.  While we determined the pistols were safe, certain units did not meet Remington’s performance criteria.  The performance problems resulted from complications during our transition from prototype to mass production.  These problems have been identified and solutions are being implemented, with an expected production restart in October.

Anyone who purchased an R51 may return it and receive a new R51 pistol, along with two additional magazines and a custom Pelican case, by calling Remington at (800) 243-9700. You will be asked to provide your name, address, telephone number, and the serial number of your pistol.

The new R51 will be of the same exceptional quality as our test pistols, which performed flawlessly.

We appreciate your patience and support. 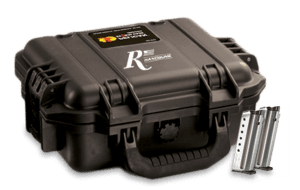