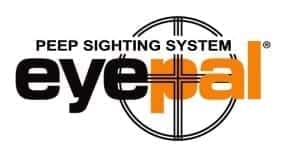 ACTON, MA  (July 2014) – The EyePal® Peep Sighting System, developed for the open-sight shooter, designed and patented by Charles Summers, a retired MIT optical specialist and avid firearms enthusiast, will be a four-time sponsor at the upcoming 2014 NRA CMP National Trophy Pistol and Rifle Matches held at Camp Perry, Ohio.  “We’re very proud to be a sponsor of the National Matches” says Mr. Summers. “It’s important for us to support a great venue and the staff who put a lot of effort into a world-class event.”

Since the National Matches were first held at Camp Perry in 1907, the “World Series of the Shooting Sports” now attracts over 6,000 participants annually.  Competitors represent a vast array of experience, including novice shooters, Olympic medalists, law enforcement, military personnel, and international shooters.

An estimated 70% of all competitors in all age groups are vision corrected.  Knowledgeable competitors utilize peep sights to help mitigate those vision challenges.  While there are a few glasses-mounted peep sights available, none enjoy the simplicity, versatility and ease of use as the EyePal Peep Sighting System.  EyePal is becoming very well known for its ability to mitigate common, as well as more significant vision challenges, that adversely impact iron sight shooters.  Its use with red dots and scope cross-hairs produces exceptional visual acuity with depth of field.  Open-eyed shooters, who require binocular vision, can use both EyePal apertures available in each kit to accommodate their needs, giving both eyes perfect vision with depth of field, an eye sight industry first.

The EyePal is the static-cling aperture solution that eliminates “fuzzy sight syndrome” by bringing into focus the sights and the target simultaneously. Applied easily onto any protective eyewear and in the shooter’s line of sight, the EyePal aperture provides depth of field. It does this by producing a very small image of the sight picture which travels undistorted through both the lens of the eyewear and the pupil of the eye. The reason this happens is the opaque portion of the EyePal aperture obscures the clutter immediately surrounding the target or game sight picture while producing the desirable and significant depth of field. Beyond the occluder is the remaining peripheral visual information needed for tactical and situational awareness. The result is a perfectly focused sight picture of both sights and the target and peripheral vision.

The EyePal is available in three versions: Rifle or Handgun Kits include two identically sized apertures matching their kit application and the most popular Master Kit includes one Rifle and one Handgun/Bow aperture. Each EyePal aperture kit is packaged in a handy and durable double-well contact lens case. Simply open the top of a well, remove the aperture and place the EyePal in the line of sight on a clean lens. Easily re-locatable and reusable, the EyePal is approved at the NRA CMP National Matches and is available online or ask your favorite retailer. MSRP $29.95

The EyePal® Peep Sighting Systems was developed and patented by Charles Summers, a retired MIT optical specialist and avid firearms enthusiast. His use of the optical properties of the pinhole camera and pinhole occluder enables shooters and archers to accurately visualize iron sights, red dots, ACOGs and holographic sights by effectively removing the eye’s refractive errors. Appreciated by many shooter and archer communities world-wide, EyePal provides the depth-of-field and remarkable visual acuity necessary to see both sights and the target or game at any resolvable distance.  www.eyepalusa.com