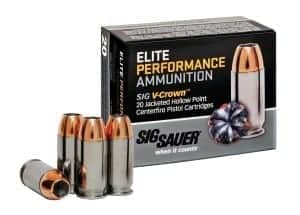 “Every product SIG SAUER produces will have the same attributes for which our firearms are known around the world – reliability, accuracy, and unparalleled performance,” said Jeff Creamer, SIG SAUER director of product management. “This new Elite Performance Ammunition consistently delivers controlled, uniform expansion and terminal performance, round after round. We are excited to enter the ammunition market and will be adding additional bullet weights for pistols as well as rifle ammunition in the months ahead.”

Another distinct advantage of the SIG SAUER Elite Performance V-Crown design is a toothed cannelure located halfway up the shank of the bullet. Its location more effectively locks the jacket and the lead/alloy core, providing maximum structural integrity in a jacketed bullet. This is key to achieving maximum weight retention and energy through impact by preventing fragmentation as the bullet mushrooms, ensuring optimal terminal performance. Brass cases are Techni-crom® coated for enhanced lubricity, superior corrosion resistance, and reliable feeding and extraction.

Elite Performance Ammunition is being manufactured in the United States by SIG SAUER to the same exacting standards as the company’s premium pistols and rifles. The SIG SAUER custom designed loading equipment coupled with a proprietary loading process, and a complete hand and visual inspection of every round, continually produces ammunition of the highest quality. In addition to rigorous testing by SIG SAUER engineers, instructors at the SIG SAUER Academy have fired tens of thousands of rounds in the development of this new and exciting line of ammunition.

Become a fan of SIG SAUER on Facebook at  http://www.facebook.com/SigSauerlnc.

About SIG SAUER, Inc.
SIG SAUER, Inc. is the largest member of a worldwide business group of firearms manufacturers that includes SIG SAUER GmbH & Co. KG in Germany and Swiss Arms AG in Switzerland. This global network of companies gives SIG SAUER a world-class firearms knowledge base, unparalleled design expertise, and extensive manufacturing capacity, enabling the company to respond quickly and effectively to changing market conditions and the needs of its military, law enforcement, and commercial markets worldwide. SIG SAUER is an ISO 9001: 2008 certified company with more than 1,000 employees. For more information on SIG SAUER, any of its products, or the SIG SAUER Academy, log on to www.sigsauer.com.