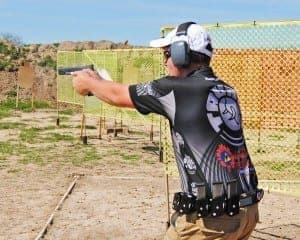 Taurus Young Guns team member, Alex Larche, was the only junior shooter competing in this division.  He had to hold his focus and stay on task to shoot above the rest. Alex stated after the match, “The Texas Open was a great match, with amazing athletes and challenging stages.  I have been coming to this match for two years now and plan on returning next year.  The Range Officers were friendly and hardworking, I couldn’t ask for a better squad. I believe the sport of USPSA would not be able to function without these individuals.”

The Single Stack match consisted of 10 challenging stages. Alex worked extremely hard to earn his position to number one during these stages. Larche was the only junior competing in this division and showed he has what it takes to be a professional shooter. He used his Taurus 1911 .45 during the Single Stack Division which operated remarkably and his professionalism and dedication paid off at the end of the competition.

The match took place just north of Houston, at Impactzone Range, in Hempstead, Texas. The Texas Open Championship draws hundreds of shooters who compete for the top ranks. The Match Director was Alex Casis and Range Masters where Arthur Brown, Bill Murray.  The host club for this event was the Generation Practical Shooters (ST22) and everyone did an outstanding job running the range and providing a safe experience.

Alex will compete again in Single Stack division at the Oilfield Classic in Bellville, TX.

About Alex Larche:
Born is Bastrop Louisiana, Alex Larche became the first member of Taurus’ Junior Team, Young Guns. With a drive and dedication towards excellence and a passion for competitive shooting, Alex exemplifies the future of competitive shooters as he competes in the Production and Single Stack Divisions with Taurus pistols at local, regional and national matches. To learn more about Alex Larche, go to: http://www.facebook.com/alexlarcheproshooter

About Taurus®:
Taurus® is the global leader in revolver production.  Taurus International Manufacturing, Inc. is proud to be the U.S. importer of all Taurus brand firearms manufactured in Brazil and to be the manufacturer of the model PT-22, PT-25 and PT-738 pistols made here in the U.S.  Taurus International services all Taurus brand firearms under the LIFETIME REPAIR POLICY™ as well.  For additional information about Taurus, visit www.taurususa.com. High-resolution images are available at www.taurusdownloads.com.