Concealed carry is on the rise! And over the last few years, the selection of small and medium size semi-automatic handguns has increased as well. While many people put a lot of thought into the type of gun they will use for concealed carry, they often neglect to put much thought into how they will actually conceal and carry their handgun.

Naturally, there are plenty of concealment holsters on the market. But, holsters certainly aren’t the only option.

I would like to introduce you to Covert Carrier! As the name implies, their company specializes in handgun concealment. But, rather than traditional holsters, the Covert Carrier system is a clip that allows the user to position a handgun inside the waistband (IWB), below the belt line.

For evaluation, Covert Carrier was kind enough to supply us with a Rohrbaugh R-9 handgun equipped with their Add-On Fastener. 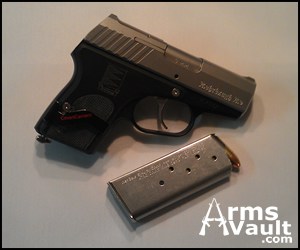 The Covert Carrier Concealment System revolves around their metal “grip clip” technology. This clip can be attached directly to a pistol’s right grip panel, or attached to a pistol via a rubber grip sleeve.

Users have three options when selecting a Covert Carrier System.

Covert Carrier Add-On Fasteners can be attached to almost any small to medium size handgun that has a removable right grip panel. This method will require a slight modification to the handgun’s right grip panel, but the process looks painless. (The Rohrbaugh R-9 handgun arrived with the Add-On Fastener already installed, so I didn’t get to experience the installation process.) If you don’t feel comfortable performing this modification, you can simply send the grip panel to Covert Carrier who will make the modification for a slight fee.

Covert Carrier Universal Sleeves have the Add-On Fastener built into them. To install you simply slide them over your grips. Select from two different sizes, based on your handgun model.

Covert Carrier currently offers replacement grips for various Beretta, North American Arms (NAA) and Seecamp semi-automatic pistols. Their Add-On Fastener is actually embedded into the right replacement grip panel. This is a great option if it is available for your style handgun.

Now, down to business… As I mentioned above, when I received the Rohrbaugh R-9, the Add-On Fastener was already installed. So, my only task was to determine how it works for concealed carry.

I should begin by mentioning that when the Rohrbaugh R-9 arrived, my wife immediately expressed that she liked the feel of this gun. So, she was kind enough to volunteer to test the Add-On Fastener. This review is a combination of both my opinions and hers.

To me, the comfort level of any handgun concealment option is always the most important issue. If it doesn’t feel good, I won’t wear it. I do however realize that many, if not most, concealment products require a break in period. But, given that this particular concealment option doesn’t involve a break in period for the leather, I assumed I would know right away if this concealment method would work for me. Quite honestly, I wasn’t overly convinced that I would like the feel of a holster-less gun inside the waistband. What can I say… I was wrong! Once positioned, it took very little time before I practically forget I was carrying the 9mm handgun.

Another issue I thought I might face with this type of holster-less concealment was stability. Without the “snugness” of traditional holster, I worried that the handgun might tend to shift depending on body position. Again, I was pleasantly surprised, and wrong. Once the Covert Carrier equipped R-9 was positioned, that is where it stayed. The company does recommend that the clip be attached to the outside edge of the right front belt loop. Although I tried various positions, it turns out that Covert Carrier knows best. In fact, at the top of the clip there is a small niche that is meant to be placed against the belt loop to create what Covert Carrier calls the “Invisible Lock.” As simple as it may seem, this little niche keeps the handgun quite secure.

With regard to stability, the only issue I had was whether or not to wear a belt. At times I tried using the Covert Carrier while wearing shorts. The “flimsy” waistband of some shorts didn’t provide adequate support. But, adding a belt fixed the problem. Plus, the belt conceals the portion of the clip that is exposed on the outside of your waistband.

Speaking of concealment, I’m not really going to spend much time discussing that. I know that may seem odd for a concealment product review, but it is really quite simple… If you are wearing a belt, no one will know you are carrying a firearm.

So, I am now securely and comfortably carrying a firearm that no one can see. The question is, how do I draw the handgun? Honestly, the first attempt felt awkward. But, after a few minutes of practice, I felt much more confident with the draw technique. Covert Carrier actually recommends two different draw techniques. The first is a two handed draw. The other involves the use of only one hand. I felt most comfortable using only one hand. However, if I were using a handgun with a longer barrel, I suspect a two handed draw would be preferable.

So, what did my wife think of the Covert Carrier? She was actually quite clever in how she used it!

First of all, women’s pants fit differently than men’s. I think we can all agree that this is a good thing! But, given the difference, she wasn’t really able to fit the Covert Carrier comfortably on the front side of her waistband. However, once she moved it to the small of her back, she was sold. As with my experience, she found it to be both secure and comfortable.

The only issue she had with the small of the back IWB setup was the draw. Because the Covert Carrier Fastener is on the right grip panel, and my wife is right handed, the gun could not be drawn in a ready-to-fire position. However, with a little practice, she became quite efficient at the draw. And this method of carrying still gave her much faster access to the handgun than carrying via a purse.

So, while I’m on the topic of carrying via a purse, as many women do, I should point out that she also tested the Covert Carrier with her purse. As it turns out, it worked quite well. The key was finding a purse that had a deep enough internal pocket for the Rohrbaugh. But, given my wife’s purse inventory, that didn’t prove to be a problem. 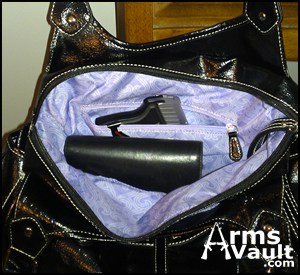 As I hinted to earlier, I went into this review with some preconceived notions that turned out to be false. I expected to find a concealment product that, at best, was an acceptable backup. What I found was a well thought out handgun concealment system that I was comfortable using on a daily basis.

Although it was the Rohrbaugh R-9 Grip with Add-On Fastener that we tested, I have every confidence that the Covert Carrier Concealment System would work equally well on a wide variety of compact handguns.

Thanks to Covert Carrier for allowing us to test out their great product. To see their full line of concealment products, visit CovertCarrier.com.