Joe Rankin with Section 8 Tactical of Cary, NC recently sent over a couple of his shooting products for review. As a bit of background, Section 8 Tactical is a design and manufacturing firm producing proprietary firearms-related products for the tactical shooter. Joe and his team are all experienced shooters who also have close ties with military and law enforcement associates who have undergone advanced tactical training. Based on the collective experience of both their in-house and extended associate network, Joe’s team have produced several innovative products which would benefit shooters of all skill levels.

First up for review was Section 8’s nifty Ultimate Retention Device (URD) for handheld tactical flashlights. The concept of using a handheld tactical flashlight in conjunction with a handgun in low light situations has gained widespread popularity in recent years, with a solid body of tactical doctrine having been developed to support it. Based on manufacturer offerings, the use of lanyard cords seems to be one of the most common methods for providing flashlight retention. An illuminating (no pun intended) article by Clint Smith in American Handgunner last year spoke to the potential risks to the proper workings of a user’s handgun caused by improperly sized flashlight lanyard cords. Smith advocated that handheld flashlight lanyard cords need to both be shortened up and have their “tag ends” removed so as to not pose an obstruction hazard to your gun’s action if the cord was inadvertently caught between the slide and breech through an open ejection port, tangled up in an exposed hammer, or caught between a magazine and the magazine well during a reload. In short, an improperly sized lanyard causing a jam during a low-light self defense situation would obviously not be good.

Section 8’s URD is an innovative approach to both the tactically effective employment of a flashlight in conjunction with a pistol, as well as to the elimination of the potentially deadly issue of an errant lanyard cord causing a gun jam at a very inopportune moment. The URD is a one piece flexible rubber device that is shaped like the number “8”. To use the product, the user selects one of three different sized rigid finger inserts to put inside the larger of the URD’s loop cut-outs. This is the part of the “8” that the user will stick their weak hand index finger through. The other loop of the “8” is placed down over the body of the flashlight. In my case, I unscrewed the tail cap of my SureFire M3 Combat Light and slid the smaller rubber loop down along the body of the light, placing the URD’s retention loop just ahead of the M3’s OEM rubber finger rests. From start to finish selecting the correct finger insert and properly installing the URD took all of two minutes and required no special tools. The URD is made out of flexible rubber material which can be easily bent, and the flashlight retention loop is sized to be used with tactical lights which have bodies that are in the 20-25 mm diameter range (0.80” – 1.00”), such as those using C123 lithium power cells. 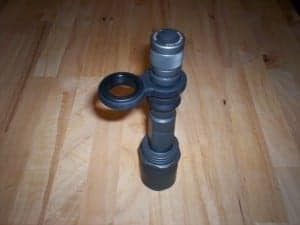 In use the URD is quite simple and easy to get the hang of. All the user has to do is to put their support hand index finger through the finger loop and flick their wrist counterclockwise to roll the flashlight over onto the back of their hand. This allows the user to have virtually the full use of their support hand while still retaining their flashlight in a relatively out of the way position. Changing magazines, opening doors, etc… does not require you to either lay your flashlight down or drop it to dangle on its lanyard. When the user needs to use the flashlight all they have to do is flick their support hand wrist clockwise and the light will roll over into their hand’s open palm. It was relatively easy and quick to flip my light back and forth to use a handgun grip configuration which allowed both the activation of the light as well as support for the shooting hand. In practice either using the index finger, middle finger, and thumb “syringe” grip, or the four-finger and thumb grip to hold and hold and activate the light, both grips proved to be equally as easy and quick to accomplish with the URD.

Prior to testing Section 8’s URD, I had taken Clint Smith’s advice and cut down my M3’s lanyard cord and had been using that to good effect; however after living and shooting with the URD for awhile I am very impressed with both the product’s concept and it’s functionality. I like it so much I intend to continue using it due to the benefits it offers by way of both speed and flexibility. I particularly like that it keeps my light securely retained while it’s out of the way close by on the back side of my support hand. If I need to use that hand I don’t have to drop the light on its lanyard and have it dangling around prior to quickly flipping the light back into position. Lastly, the URD’s small, flexible rubber design would be of benefit for military or law enforcement personnel who carry their tactical light “head down in a belt holster, and would offer much more tactical benefit than a loose lanyard cord which could get snagged on things and not be as quick to employ.

The next Section 8 product reviewed was their proprietary TAC-PAC storage kit designed for carrying small user-level repair items for firearms, power cells/spare bulbs for tactical lights, and other accessories. Specifically, the TAC-PAC is a compact two-piece injection molded container which incorporates interchangeable, customizable foam interiors, which are either custom cut for specific items, or uncut so that the user can trim them to fit their particular needs. The lid to the container is a tight-fitting rubber piece that forms a waterproof seal when securely snapped in place. Think of it as foam-lined Tupperware for your gear.

The TAC-PAC is designed to reside in a Velcro flapped, nylon pouch, which also has Velcro straps serving as a belt loop attachment point. Of note, you don’t have to take your belt off in order to remove the pouch from your belt. The straps let you keep the belt on as an option. The straps will work with tactical or web belts up to 2” in width. Additionally the TAC PAC is sized so that it can be carried in the pockets of BDUs or other tactical clothing.

The custom cut foam inserts allow the user to carry everything from a complete spare AR-type rifle bolt, unassembled spare bolt internals for an AR-type rifle, C123 power cells, or AA power cells. The blank foam insert can be custom cut to accommodate any item that is no larger than approximately 3.25” wide by 3.5” high and 1” thick. From a tactical standpoint the foam provides quiet protection for your small items, while the TAC-PAC keeps everything conveniently grouped together and handy. Military and law enforcement users would find the TAC-PAC, with its range of customizable foam inserts, especially useful due to it dovetailing nicely with their typical gear selection. Casual/recreational users would find it a convenient weatherproof option for storing their field repair and replacement items which fits nicely in a shooting bag or vest.

I highly recommend these pieces of well thought out and well executed shooting gear. Whether you’re a newbie or you’re a seasoned pro, Section 8 Tactical gear can help you succeed.