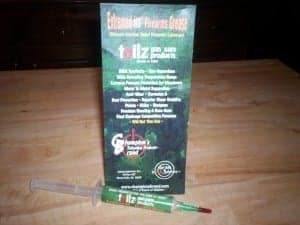 Gil Brown of Champion’s Brand Reloading Products in Mount Holly, NC sent me a sample of his Toilz Extremed HD Firearms Grease for testing recently. The grease, which is Gil’s proprietary formula, is a 100% synthetic lubricant and designed for metal-to-metal applications over a wide temperature range. According to my conversations with Gil it has a PAO, or poly-alpha-olefin, base. PAO is a class of super-slick synthetic polymer which readily maintains its viscosity and lubricating properties throughout a range of high to low temperatures. It is a key ingredient in most all of the modern, high tech synthetic motor oils in use today. Extemed HD grease comes packaged in handy syringe applicator so that you can conveniently put just the right amount of grease in just the right spot on your firearms. The grease is on the thinner end of the spectrum, and when combined with the syringe applicator it is just the ticket to lightly lubricate slide/frame rails or a reciprocating bolt assembly.

I tried the grease on my 1911 which I routinely use for both practice and IDPA competition. Traditionally I’ve been a CLP-type gun oil user on my 1911 so using grease on my .45 was a first. Following Gil’s instructions I applied a couple of modest dots of grease to the slide/frame rails, and then lightly rubbed them in with a Q-tip until the color went away, becoming clear. I also applied more grease in the same manner to the outside muzzle end of the barrel, the barrel lugs and hood, the disconnector, and the slide stop pin. Off the bat the first thing that I noticed is that you don’t need to apply but a dot or so to adequately lubricate the intended area. Secondly, I noticed that as you rub it with the Q-tip (or your fingers in a pinch) it becomes a very thin, relatively dry film that is not tacky. As I was to discover later at the range these attributes allow the grease to stay put, provide proper lubrication, and do not inordinately attract/trap burnt powder fouling. After reassembly and function checking the action my initial perception was that the slide’s movement back and forth on the frame was nice and smooth. There were no signs of lubricant collecting at the rear frame/slide rail intersection, as sometimes happens with CLP oil as you rack the slide a few times after reassembly. This lack of excess lubricant combined with the product’s dry film properties does not attract dirt.

During the course of two subsequent range sessions, firing a total of 400 rounds, the gun’s action did not appear to require additional lubrication, nor was it inordinately dirty around the frame rails and feed ramp with fouling from my standard 200 gr. lead semi-wadcutter reloads. Don’t get me wrong, the gun was obviously not squeaky clean and it did have powder fouling on its external surfaces, however it only had a minor amount of fouling around the feed ramp area. Overall, this was not enough to cause any failures to feed or extract/eject. Often 1911 shooters will sparingly put a couple of drops of gun oil at the gun’s critical lubrication points after a couple hundred rounds to keep things running smoothly during extended shooting sessions. I found I did not need to do this during the range sessions as the grease film was still evident where I had originally applied the lube. The added bonus was that the gun’s feed ramp and top of the frame were not gunked up with the powder fouling typically trapped by my CLP oil. If anything I would say that when applying a dry film of this grease I’m not “sandpapering” my gun’s moving parts to the degree I normally would when using traditional gun oil which has trapped lead particles and unburnt powder in the gun’s action.

I intend to continue using Toilz Extremed HD Firearms Grease on all my semi-auto pistols based on my experience with this product. Also, I enthusiastically recommend this product for those shooters needing a high performance, modern gun lubricant which offers both superior wear protection and operating mechanism cleanliness benefits in a handy, convenient package. A 10cc syringe of Toilz Extremed HD Firearms Grease lists for under $10.00 on the Champion’s Brand website. 10cc’s of this product sparingly applied via the syringe applicator should last the average user quite awhile. Champion’s Brand also offers a 16 ounce container for higher volume users such as armorer’s or gunsmiths. For more information you can go online to: www.championsbrand.com to check out Extremed HD, as well as the rest of the Toilz family of gun care products. Additionally, Gil Brown at Champion’s Brand can be reached at (704) 822-6633. 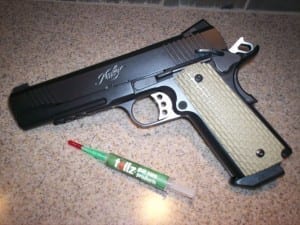